Ancestories
Richard Edgar "Eddie" Kinsman was the sixth of seven children of Thomas Kinsman and his wife Elizabeth Ann Steers, born on 17 June 1862 in Hibbert Township, Perth County Ontario. He grew up as a farmer's son in Perth County, moving in November 1875 from rural Hibbert Township to another farm near Kirkton Ontario.  In January 1880 the family purchased the general store in St. Pauls Station Ontario, and 18-year-old Richard Edgar Kinsman became the shop keeper.  At the end of October 1882, he purchased his own general store in Staffa Ontario and moved there, as a bachelor.

Richard Edgar Kinsman met his future wife, Emily Susan Palmer, on 16 January 1882.  She was the cousin of the William Helson family of Stratford Ontario, family friends of the Kinsmans.  They married on 13 October 1884 in Chicago Illinois, the place where she and her family were living at the time.  The couple resided in Staffa when their first son, Edgar Palmer Kinsman, was born on 24 December 1885.  By the time their second son, Robert Horace Kinsman, was born on 10 August 1894, the family had relocated to Hamilton Ontario.  Richard Edgar Kinsman operated a successful lumber business until he was forced to retire after having suffered a stroke in about 1910.  He died on 16 July 1912 and is buried, along with his wife and members of her family, in Hamilton Cemetery, Section Q2-Lot 60.

To explain my relation to the Kinsmans - I am the granddaughter of Leila Marion Kinsman's second husband George Pirie "Scott" Mitchell. Grandma Marion died on 11 May 2012 after having outlived both of her husbands; she had four step-children (my father included), but did not have any children of her own. This collection of diaries kept by her grandfather Richard Edgar Kinsman was inherited by Marion, likely after her own father's death in 1955.  Knowing my interest in genealogy, my father (Marion's stepson) told her that I would enjoy having them and would know what to do with them. In this way, Richard Edgar Kinsman's diaries came to me after Marion's passing. I have since donated them to the Stratford-Perth Archives, but not before first scanning them in their entirety and posting them here.

Richard Edgar Kinsman states in his diary that he started recording daily events in November 1875, at the same time as the family moved from rural Hibbert Township to Kirkton.  The earlier volumes were not part of the archive that was given to me; they are either lost, or with another member of Marion's family.  The extant diaries in my possession cover the period from 1 March 1878 to late October 1888.
In April 2018, I went searching for Richard Edgar Kinsman's final resting place.  I had contacted the office of Hamilton Cemetery prior to my visit, and having learned the section and plot number, I traipsed around the cemetery grounds looking for his monument, without success.  I stopped into the cemetery office in person, and was able to learn the precise location of his family's plot, including the names of the people interred on either side of it.  Looking between the monuments for "Kemp" and "Dean", I was sad to discover that his grave is not marked.  Someday, when finances permit, I will make sure that the name of this industrious and thoughtful man - as well as the names of his wife, father-in-law, and sister-in-law who are also buried here - are not forgotten. 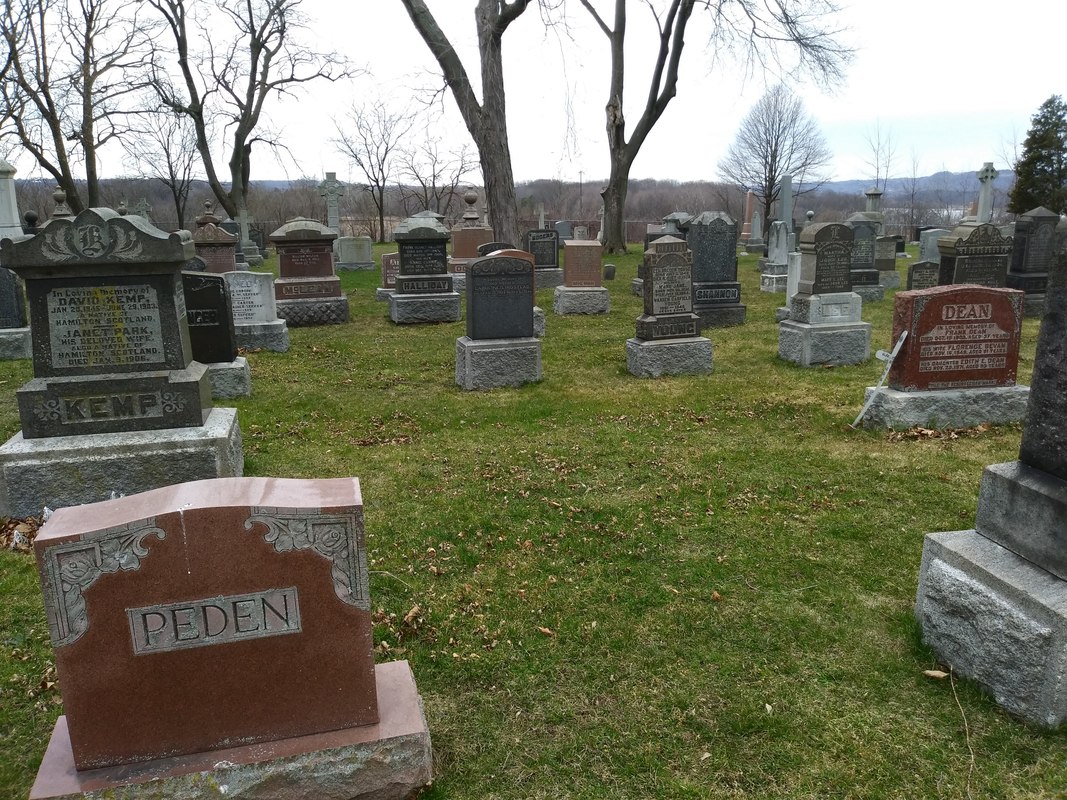 I have prepared an index to these diaries.  It is a work in progress.  I have yet to add the names of acquaintances mentioned, but most of the family members mentioned are indexed now.  Download Index